These were some of the last words spoken by Sister Mary Jude as we said our goodbyes.

This Memorial Day weekend was spent making a pilgrimage of sorts to the Monastery of Our Lady of the Rosary. It was Sister Mary Jude’s 50th Golden Jubilee of her Profession as a cloistered Dominican nun. It’s not often one gets a glimpse of this contemplative and prayerful life behind the monastery walls and when invited to share in this special day, I didn’t think twice. So with my mother and five year old daughter in tow, we flew to Buffalo, NY.

I had been there before, 25 years earlier for the Silver Jubilee and my first time before that was in the early 80s with my mom and grandmother. I wanted to keep with that “tradition” and share the experience with my own daughter. Those that know me well as non-religious found it hard to believe this was such a big deal to me. Why would I be canceling my trip to Vegas in favor of hanging with cloistered nuns in a monastery? What’s the draw?

My answer, Sister Mary Jude is my Great Aunt Terry. She is my maternal grandmother’s sister and in her days on the outside lived life to its fullest. She was known as daring, free-spirited, beautiful and stylish and with the voice of an angel. She sang in her Uncle’s band and always made time to visit the children at each of her sisters’ homes. She was also engaged to be married before she received her calling.

Since 1961 she’s been a different kind of sister, but hasn’t lost her spunk. She still keeps the other nuns on their toes and is still quick to enjoy the finer things in life, situation permitting, or fitting should I say.

When we told her she accepted communion but did not partake of the wine, she seemed disappointed in herself and was sure she would make it up with two sips next time. Our cousin came to the rescue and brought a water bottle filled with remnants of strawberry and mango Arbor Mist. A quick spin of the turnstile and it was in the grateful hands of Sister Mary Jude. Time and prayer has affected her ability to raise her head very well at the ripe age of 86 but damned if she didn’t throw that sip of wine back in a hurry. She joked it was no problem to raise her head when she needed to.

Once during our conversation she had also honed in on my daughter who was sitting at the table quietly coloring in one of the religious coloring books offered there. My daughter was also snacking. “What’s she eating?” my Aunt Terry asked.

In an instant we were also introducing her to Pirate Booty. Enter Sister Mary Emmanuel who has been in just a bit longer than Aunt Terry, having entered when she was 18. She’s the perfect compliment to Aunt Terry and you can tell they enjoy each other’s company. We introduced her to Pirate Booty as well…and then the iPad.

Both were amazed by the technology and ability to see the rest of the family members in an instant. Sister Emmanuel got the finger swipe mastered in all of 2 seconds and I sat there just caught in the emotional moment of my littlest daughter on the other side of the cloister grill work in the loving hand of Great Great Aunt Terry (to her anyway). The joy it brought to both sisters was so heart warming and I started to get the idea that all of the nuns should have their own iPads. But then again, that kinda goes against why they are there in the first place.

At the end of the visit for the day, it was just my mom, my daughter and me and even Aunt Terry was finally alone on the other side. We were all having a hard time letting go. At our urging, we proposed the sneaky idea of her coming out of the cloister door to say a physical goodbye. She had done it only once before that we were aware of. It seemed to take forever to unlock and open the door, but once it opened we all wasted no time in getting huge hugs and kisses with Aunt Terry. Before she hugged us she said with a twinkle in her eye, “God will forgive me, won’t he?”. 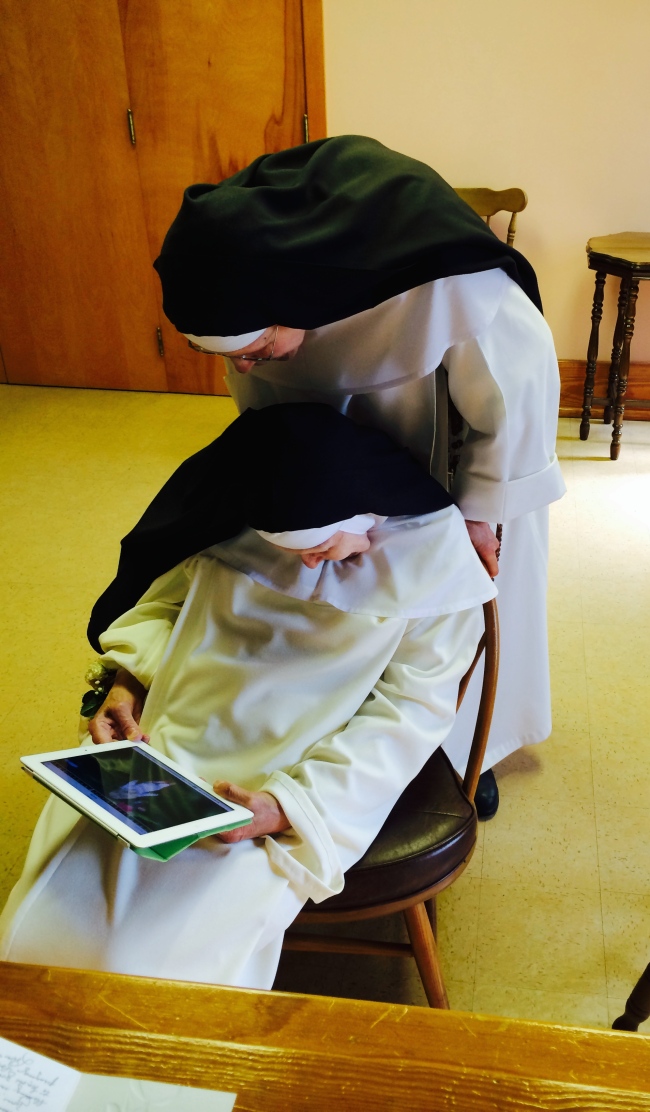 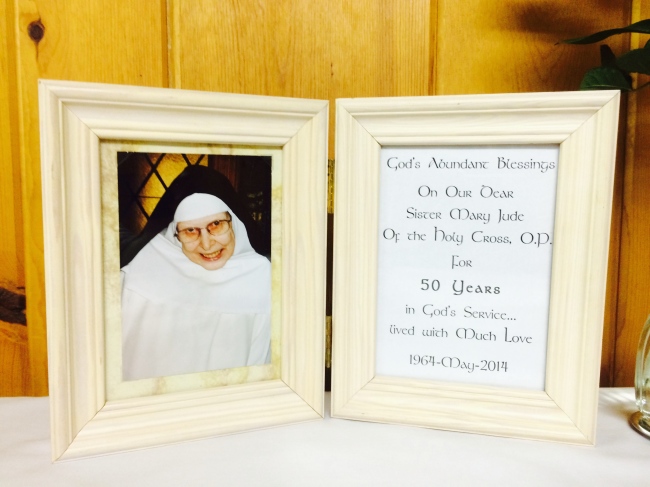 Yes Aunt Terry, I think for you, he will forgive this moment and by the way your huge shipment of Pirate Booty is on the way to the monastery. Love you.